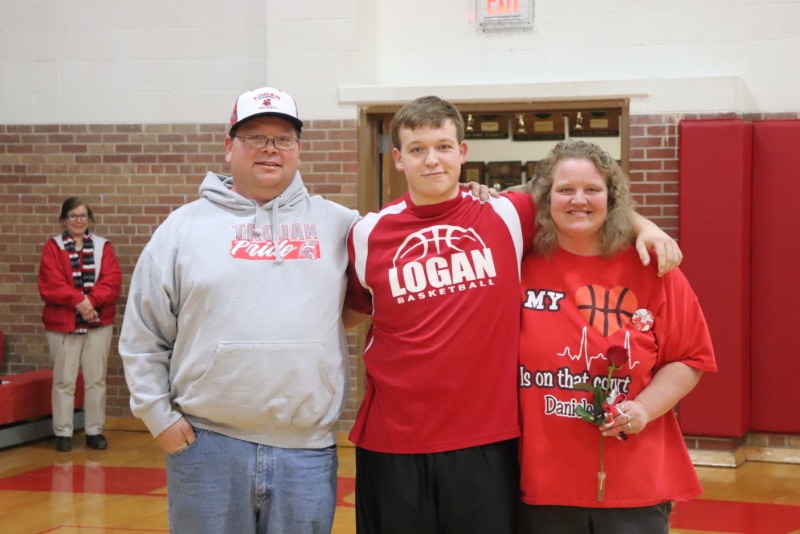 As the end of February hits, so does post-season basketball. This year post-season came a week earlier for Kansas 1A schools as regionals was reinstated again. The Lady Logan Trojans found themselves as the #6 seed in the Hill City Regional but traveling to the #3 seeded Osborne Bulldogs on Monday, February 18th. The speed and full court pressure provided by the Bulldogs proved to me more than the Lady Trojans could handle as they end their season with a 29-43 loss to Osborne. The Lady Trojans were led by Khloee Braun with 11 points, 11 rebounds and Harlee Voss with 7 points and 7 rebounds. They finished the year with a 7-12 record for the season and look to have everyone back for next season as there are no seniors on the team.
The Logan boys team went into Regionals as the #4 seed, which provided the privilege to host the first round game in Logan.  On Tuesday, February 19th the #5 seeded, Thunder Ridge, came to Logan for this regional matchup.  During this game, the Trojans capitalized on multiple Longhorn turnovers and went on to win 59-44. During this matchup the Trojans were led by Michael Daniels with 16 points, 6 rebounds, and 3 steals.  Bodey LeRoux, Nate Cruz and Ian Sparks all contributed 9 points.  Sparks had 5 rebounds, LeRoux had 6 rebounds and Cruz also had 5 assists and 2 steals.
With the the first round win, the Trojans earned a game with the undefeated Osborne Bulldogs on Friday, February 22nd in Hill City.  The first quarter proved to be the achilles heal during this game as the Trojans found themselves down 20-5.  After settling in, the Trojans cut into the deficit and were within 8 much of the 3rd quarter.  However, the 4th quarter got away from the Trojans and their season ended with a 52-71 loss to the Osborne Bulldogs.  During this game senior Michael Daniels had 16 points, 5 rebounds and 2 deflections.  Junior Trey Kats contributed 15 points, 5 rebounds, and 4 assists.  The Trojans finished their season with a 9-12 record.
Thank you to all the Logan basketball fans who have been so faithful to the Trojans throughout the season!