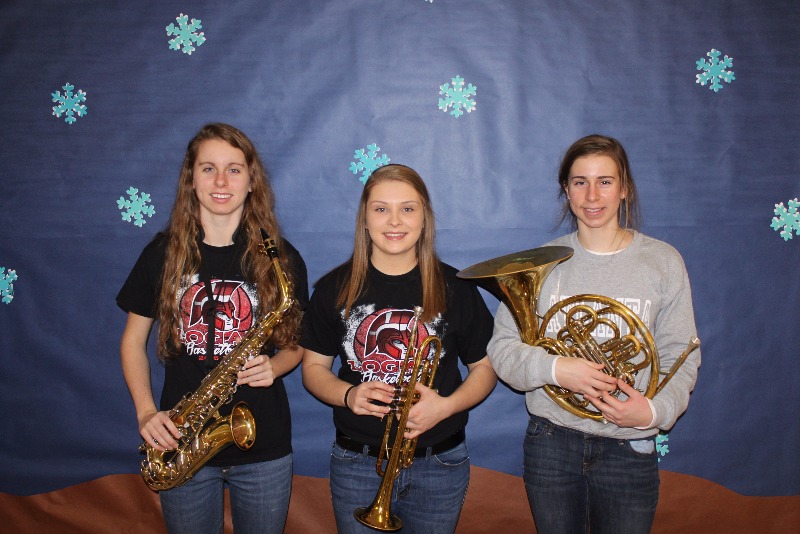 Students to participate in KMEA Honor Band and Choir

Selections for the NW District KMEA High School Honor Band and Choir have recently been announced.  Representing Logan High School in the Honor Band will be Madison Gottstine, freshman daughter of Phil and Janet Gottstine, Faith Hofaker, senior daughter of Jay and Paula Hofaker and Kayla Hofaker, senior daughter of Jay and Paula Hofaker.  All three girls auditioned on required material and were chosen from a pool of students from the NW District.  Madison, Faith and Kayla earned the first chair spots in the trumpet, alto saxophone and horn section, respectively.  Faith will also receive a four-year participation medal.  Darrian Elliott-Lammers, senior daughter of Crystal Rule and Jason Lammers, will represent Logan in the district Honor Choir.  Darrian was selected based on a live audition of required music in November. The concert is Saturday, Dec. 10 on the campus of FHSU inside Sheridan Hall at Beach-Schmidt Performing Arts Center. The concert begins at 3:30.  It is open to the public.  Admission is $5 for adults; students are admitted free.

In addition to the high school honor band and choir performances, Logan is also represented in the Elementary Honor Choir.  Selected to perform with other 5th-6th grade students from the northwest district are Katie Kendall, Kylie Uhland, Levi Rust, Hayden Gottstine, Cydnee Rider and Grayci White. These students will rehearse during the morning of Dec. 10 with their hard work culminating in a concert beginning at 12:30 p.m. The concert will be held inside Sheridan Hall on the stage of Beach-Schmidt Performing Arts Center.  Admission is $5/adults; students are free.  Admission is good for both concerts.

Congratulations to all students.  Paul Prewo and Vesta Jo Still are the instructors.