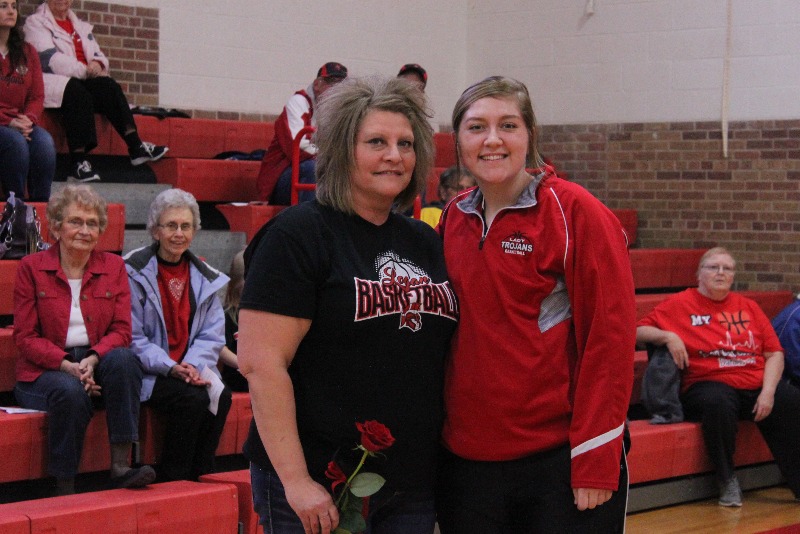 On Friday, February 16 the Logan Lady Trojans played their last home game of the season against Wheatland/Grinnell.  With it being the last home game there were five senior girls (along with their parents) honored for their participation in basketball, cheer and dance.  They were: Lexi Hilburn (Basketball), Makenzie Jansonius (Dance), Ryann Kats (Basketball & Dance), Mollie Sammons (Cheer), and Miranda Shellito (Cheer).  The Lady Trojans came up on the short side in the game as they suffered a 35-52 loss to the Thunderhawks.  The full court pressure proved to be a large part of the difficulty for the Trojans as the turnovers mounted.  In the game the Trojans were led by Harlee Voss with 11 points, 3 steals and 3 rebounds, Camryn Greving with 8 points, 7 rebounds, and 2 steals, and Kelcee Braun with 8 points, 2 rebounds and 5 steals.

The final home game of the season for the Logan Trojans was against the Wheatland/Grinnell Thunderhawks.  The four senior basketball players, along with their parents, were honored with a brief ceremony before the game.  Those boys are Riley Allen, Colton Greving, Lane Stapleton and Shaydin Speth.  The game provided to be close all the way through and it ended in a 42-37 victory for the Trojans.  Leading the way were senior, Riley Allen, with 12 points and 13 rebounds and junior, Michael Daniels, with 12 points, 10 rebounds and one steal.  With the win the Trojans move to 13-4 on the season with two games to go.  The next action for the Trojans will be Tuesday, Feb. 20 at Downs against the Lakeside Knights.