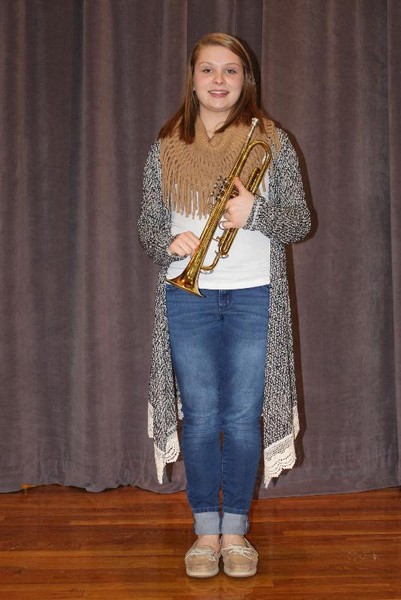 Hours learning to buzz and move her fingers in order to play her trumpet, and countless trips to Hays for lessons with Mr. Dawson have opened many doors for Madison Gottstine, 8th grade trumpet player at Logan Junior High.  Madison started playing trumpet in the fifth grade.  Madison recalled that when she placed the mouthpiece on her lips, she knew she was meant to play the trumpet.  Music is nothing new to Madison. In addition to playing the trumpet, she also takes piano lessons and has also taken singing lessons.

During the weekend of January 22-23, Madison played her trumpet on the stage of the beautiful Lied Center at  Kansas University.  She was a member of the John Philip Sousa Honor Band.  A group of about 100 7th-9th grade students came together to rehearse and perform.  Six hours of rehearsal with Dr. Quincy Hilliard, composer in residence at the University of Louisiana, Lafayette. culminated in an outstanding concert.  The concert featured two of Dr. Hilliard’s pieces, Centerstage March  and Octane.  Madison was selected to the John Philip Sousa Honor Band based on an audition of required music.  Students in the band were from larger schools located in the Kansas City area.  During the course of the weekend, Madison commented that she was so happy just to be playing her trumpet surrounded by others who shared in her enthusiasm.  Other accomplishments on her resume include soloist in the High Plains Band Camp jazz band and first chair trumpet in the NW KMEA Honor band.  Madison is the daughter of Phil and Janet Gottstine, Logan.