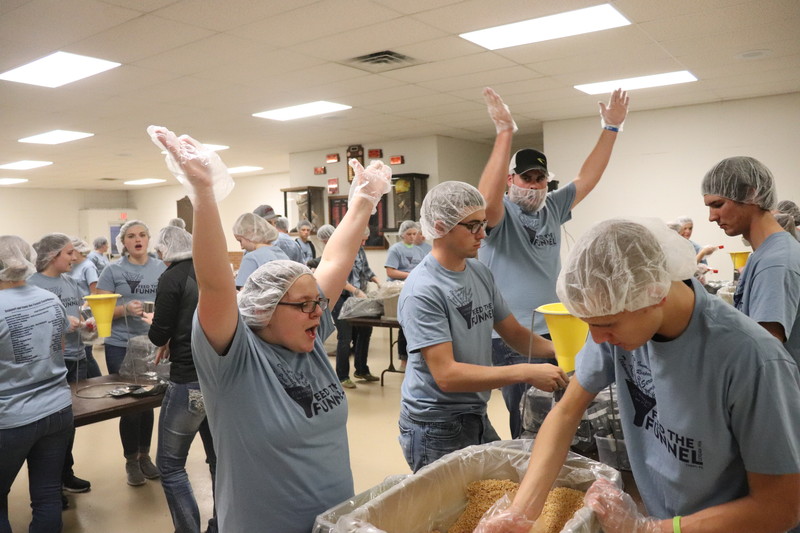 At their annual retreat in August, The Logan FFA Officers decided to bring The Pack Shack (Feed the Funnel) to Logan to help those in need in our county and surrounding counties.  The officers wrote letters to all NW District FFA Chapters and asked them to participate in their Feed the Funnel Party.  They called The Pack Shack and set a date for Nov. 27, 2017.  They were told that to host the party, they had to raise a minimum of $6,250 which makes 25,000 meals.

Four area FFA Chapters including Norton, Thunder Ridge, Almena and Hill City raised money for their communities and participated in the party as well.  Letters were also sent out to businesses and other organizations for monetary donations and teams to help make the meals.

The Logan FFA members met at 1:30 p.m on Nov. 27 to set up tables and put out the ingredients for the soup mixes.  At 5:00 p.m. approximately 120 people from the Logan, Hill City, Norton, Almena, Kensington, and Phillipsburg areas came together, grabbed hair nets and gloves and donned a Feed the Funnel shirt designed by Ryann Kats and printed by the Logan Laser students.

Ten tables were set up with a funnel in the middle.  Rice, soy, dried vegetables, cheese packets, and vitamins were fed into the funnel and put in bags.  The bags were then sent to the sealing tables where they were weighed and heat sealed.  They were then thrown to the packers who packed 36 bags per box.  Each of the bags of soup mix will feed 8 people, and every box has enough soup mix to feed 288 people.

In an hour, the group made 25,350 meals!  The Logan FFA raised enough money for 53 boxes of soup mix to help feed those struggling with food insecurity in Phillips County.  The Logan FFA Chapter plans to distribute the soup mixes during the holiday season and throughout the year to those in need.

The Logan FFA Chapter and Officers would like to thank everyone who supported the Feed the Funnel Party in any way.  Those who donated money or helped make the 25,350 meals, we appreciate your help in allowing us to accomplish our goal to help those in our area struggling with food insecurity.