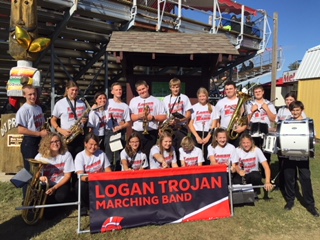 In the dark morning hours on Monday, Sept. 10, 18 Logan Band students sleepily climbed on the bus for their annual trek to Hutchinson to perform at the Kansas State Fair. After some initial confusion, the band made their way through the fairgrounds and performed at the Bretz and Young Arena.  The band played, “Louie, Louie” and “The School Fight Song” for the audience which included three judges.  For their efforts, the band received a “1” rating.  The judges complimented the band on their good sound and straight lines.  The time and efforts put forth during early morning practices paid off.  Vesta Jo Still is the director.  Congratulations, band!