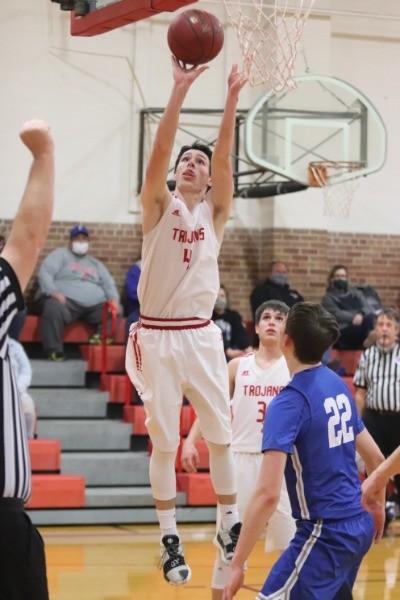 Trojans wrap up final home games of the season

The Logan/Palco high school basketball teams wrapped up regular season home games this week by hosting Thunder Ridge on Tuesday, February 9 and league opponent, Weskan, on Friday, February 12.  On Tuesday both JV Trojan teams suffered losses. The varsity girls also had a tough night as they lost to the Lady Longhorns 33-46.  During this game the Lady Trojans were led by Rylee Delimont with 8 points and 7 rebounds and freshman Cydnee Rider with 6 points.  The Trojan boys however were able to put together a 49-39 win.  Against the Longhorns the Trojans were led by juniors Ty Kats with 17 points and 3 assists and Dylan Van Laeys with 10 points and 14 rebounds.

On Friday against the Weskan Coyotes, both JV teams played short games. The Lady Trojans lost that contest, but the Trojans put together a decisive win.  With a couple players out due to injuries, the Lady Trojans found themselves struggling to find some offensive production. The result was a 27-54 loss. A highlight of the night was shooting 9 for 10 from the free-throw line. Khloee Braun ended the game with 12 rebounds and 6 points and Kenzie Wells also had 6 points.  In the boys game the Trojans jumped to a 32-13 halftime lead, and then hung on to win by a score of 48-29.  The Trojans were led by Kylor Hogan with 17 points and 8 rebounds and Ian Sparks with 7 points, 9 rebounds and 1 assist.