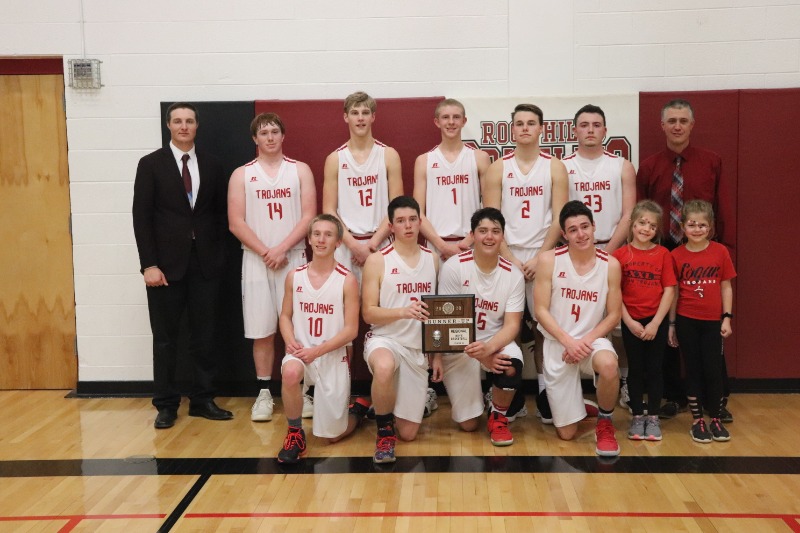 In their first of four trips to Mankato, the Logan Trojans began their Regional play on Monday, Feb. 24 as they played Rock Hills and won with a score of 66-43.  Sophomore Dylan Van Laeys put up a double-double with 20 points and 11 rebounds, followed by Ty Kats with 15 points and 4 steals.  The Trojans returned to Mankato on Thursday, seeded against the #1 ranked Osborne Bulldogs.  The game looked bleak for the Trojans in the first quarter when the Bulldogs jumped to an early 11-2 lead, but the Trojans came back and were up 15-13 by the end of the first buzzer.  The Trojans kept putting up shots and played tough defense to maintain the lead throughout the rest of the game, winning with a score of 66-57.  Dylan Van Laeys led the charge with 17 points and 13 boards, with Ian Sparks adding 16 points and 11 boards.  Trey and Ty Kats each added 11 points.

After watching the girls game on Friday, the boys returned one more time to Mankato on Saturday to take on Stockton.  The Trojans came out flat from the beginning and couldn't keep up with the Tigers.  The game ended with a score of 32-74.  Ian Sparks led with 10 points.  The Trojans ended the tournament in second place, but will still advance to the Sub-State tournament in Wakeeney, where they will take on Sylvan Grove on Thursday, March 5.  Congratulations, boys!  Good Luck at Sub-State!!