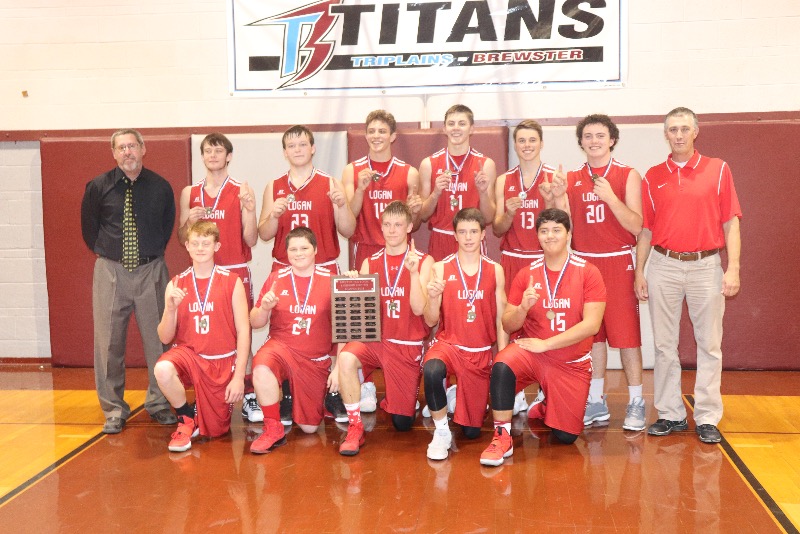 In the opening game of the tournament the Logan Trojans faced the Golden Plains Bulldogs. The Trojans jumped out to a 18-7 lead in the 1st quarter and really never looked back as they posted a 56-35 victory.  Leading the Trojans were Michael Daniels with 16 points & 15 rebounds, Colton Greving with 15 points and 13 rebounds and Riley Allen with 10 points, 11 rebounds and 3 steals.

On December 8 in the semifinal game the Trojans were matched up with the home team Triplains/Brewster Titans.  The Titans in general were small and quick, and that could not matchup with the size and speed that the Trojans showed that night.  In the last game of the night the Trojans got the 63-44 victory over the Titans.  Leading the charge was senior Colton Greving with 19 points, 6 assists and 3 steals.  He was followed closely by Michael Daniels with 16 points and 6 rebounds, Riley Allen with 12 points and 13 rebounds and Trey Kats with 8 points and 5 assists.  The Trojans shot an impressive 60% from the field in the contest.

Once again the Logan Trojans went to battle in the championship game of the Sagebrush Shootout Tournament against the Indians of St. Francis.  The defensive play of both teams kept the score very low as the half time score was only 22-12 (Logan leading).  The Indians put up quite an effort in the second half, but the Trojans were able to hold them at bay and come up with the 51-48 win.  Senior Riley Allen had 14 points, 10 rebounds and 2 steals, senior Colton Greving had 14 points, 7 rebounds, 2 assists and 2 steals, junior Michael Daniels contributed 10 points and 10 rebounds, and senior Lane Stapleton had 8 points and 3 assists.

Congratulations to Colton Greving for his selection to the All-tournament team!!