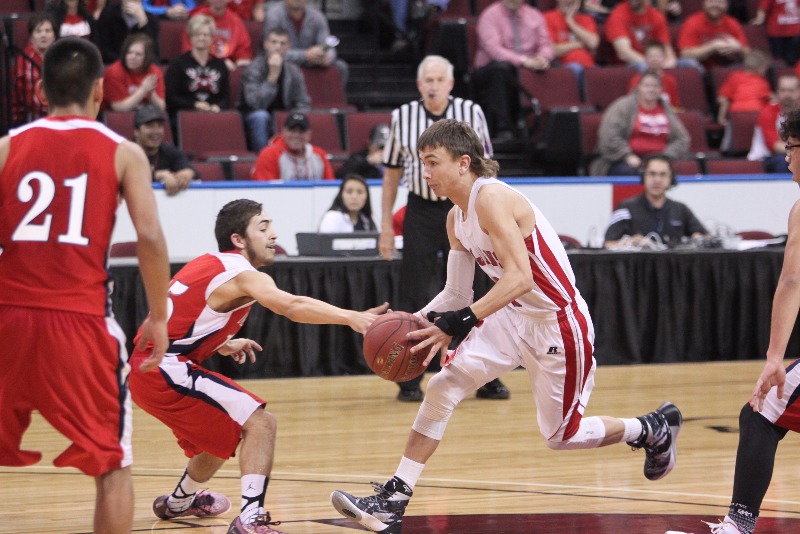 Trojans Secure A Spot in the Final Four

Nineteen years ago the Logan Trojan boy’s basketball team qualified for the Kansas State basketball tournament in Hays, Kansas.  Certainly none of the players on this year’s Logan team remember that weekend . . . as they were not even alive at that time.  Consequently the excitement at USD #326 and the contributing communities is overflowing!  On Wednesday, March 9, after a large and entertaining pep rally, the boys were escorted out of town by the local fire department, as they made their way to Dodge City and the 1A Div. II State Tournament.  In the quarter final round, the #3 seeded Logan Trojans drew the #6 seeded Deerfield Spartans.

Perhaps it was nerves, but perhaps it was just “business as usual” as the Trojans found themselves trailing at the end of the first quarter 9-15.   Through the year it has not been uncommon for the Trojans to have to overcome an early deficit.  However, with characteristically tough defense they fought their way back by out scoring the Spartans 11-5 in the second quarter.  This left the score knotted up at 20 at half time.  In the second half the Logan team came out with a mission in mind and outscored the opponent again, but his time by a 14-6 margin.  Going into the fourth quarter the Trojans held a 34-26 lead, but with the Spartans, who are known for their 3-point game, there was really no “safe” lead.  With about a minute left to go the Spartans regained a one-point lead.  A couple late Logan steals and good free throw shooting however secured the 48-43 victory for the Logan Trojans.  Regan Kats led the Trojans with 25 points, 12 rebounds and a blocked shot.  Josh Van Laeys had 11 points, 15 rebounds, 4 assists and drew 2 charges.  Kelson Kats had 8 points and 8 rebounds.  Austin Tien was 2 for 2 from the free throw line at a critical point in the game and had 4 rebounds and an assist.

With the victory, the Trojans will face #2 seeded Attica High School.  This game will be Friday, March 11 at 8:15 in Dodge City at the United Wireless Arena.