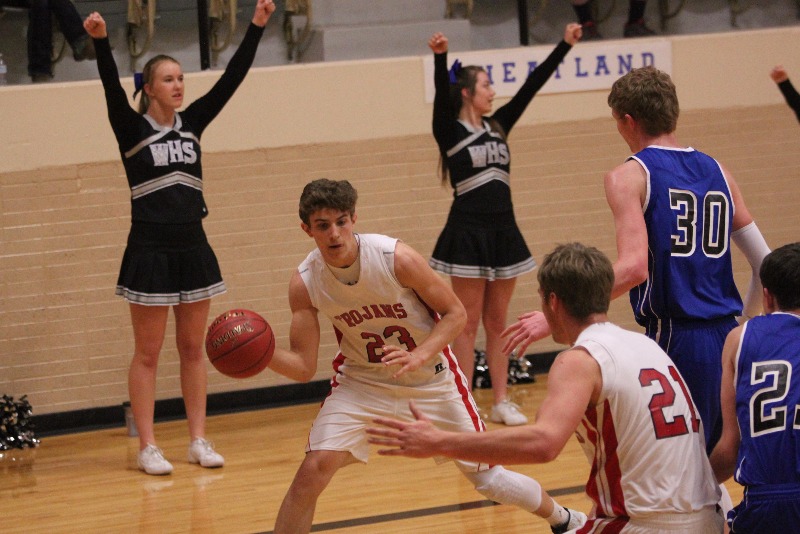 The 2017 boys sub-state semifinals game was a repeat of the matchup from the 2016 sub-state finals featuring the Logan Trojans and the Wheatland/Grinnell Thunderhawks where the Trojans prevailed and eventually secured 4 th place at the state tournament.  In the teams previous 2017 meeting, it was an ugly game, with both teams struggling to get into their offense and put points on the scoreboard.  During that game, senior and leading Thunderhawk scorer, Jorge Esparza, didn’t play due to a knee injury.  However he returned to play in the sub-state games.  At half, the Trojans had put up a 27-19 lead.  However, the second half of the game belonged to the Thunderhawks as they outscored the Trojans 36 to 20 and went on to defeat the Trojans by a score of 47-55.  In the final game of his career, Josh Van Laeys posted 23 points, 20 rebounds and 3 steals. Senior Kelson Kats finished his year averaging 8.1 points per game and 1.8 steal per game.  Junior Riley Allen had 7 points, 5 rebounds and 4 assists in the game and sophomore, Michael Daniels finished the game with 6 points and 3 rebounds.  For the year the Trojans posted a 14-7 record and will graduate two players from the roster.  Congratulations to the coaches and players for a fine season.