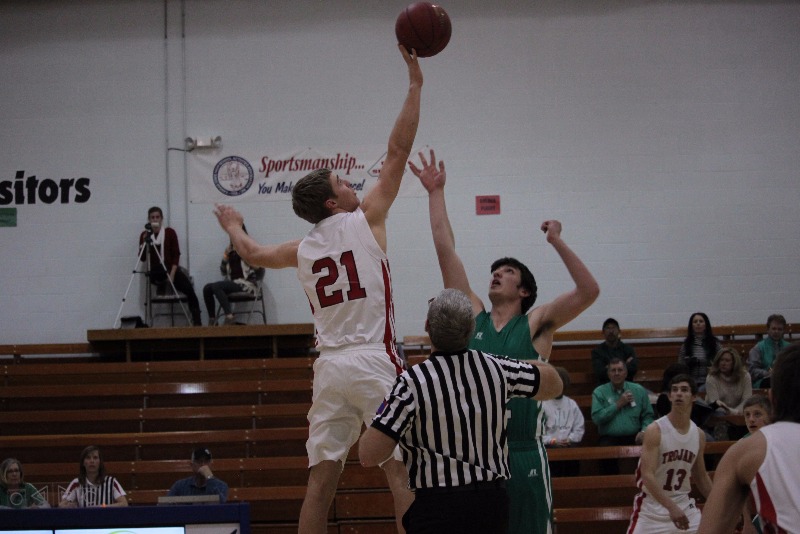 In a neck and neck race for the one seed in the WKLL basketball tournament, the Trojans were able to secure

that #1 position and were therefore slated to face the Northern Valley Huskies in the quarter final round. In that opening game, Logan was able to out score the Huskies by a score of 55-38. The difference in the game came in the third quarter when Logan out scored Northern Valley 17-5.  The Trojans saw three players scoring in double digits with Tien and Van Laeys each pouring in 15 and Regan Kats with 10. The Trojans found themselves out-rebounded by the Huskies 30-28. Van Laeys led the rebound stat with 11 and Regan Kats dished off 6 assists that night.

The Trojan win set up the matchup against the Golden Plains Bulldogs in the semifinals round on Friday, Feb. 5.  The Bulldogs were able to slow

the pace and gave the Trojans a very close game, but the Trojans obtained the 39-33 victory.  Golden Plains was held to a measly 2 two point field goals for the entire game. They did however pour in 7 three pointers.  Regan Kats had an impressive offensive night with 19 points and 2 assists. Josh Van Laeys contributed 10 points, 12 boards and 5 assists and Kelson Kats had 2 points 2 assists and 4 rebounds.
The final game of the 2016 high school WKLL basketball tournament featured a matchup between the number one seeded Logan Trojans and the number two seeded Wheatland/Grinnell Thunderhawks.  On this particular evening the Thunderhawks proved to be more than the Trojans could handle. Cold shooting and a relentless full court Thunderhawks press plagued Logan and helped contribute to the 15 point half time deficit. The Trojans had a much more positive second half but the lead was too much for them to overcome.  With the 34-51 loss, the boys earned the runner-up title at the league tournament.  On the offensive side, Kelson Kats had 6 points, with Josh Van Laeys and Regan Kats both scoring 11.
Share via email