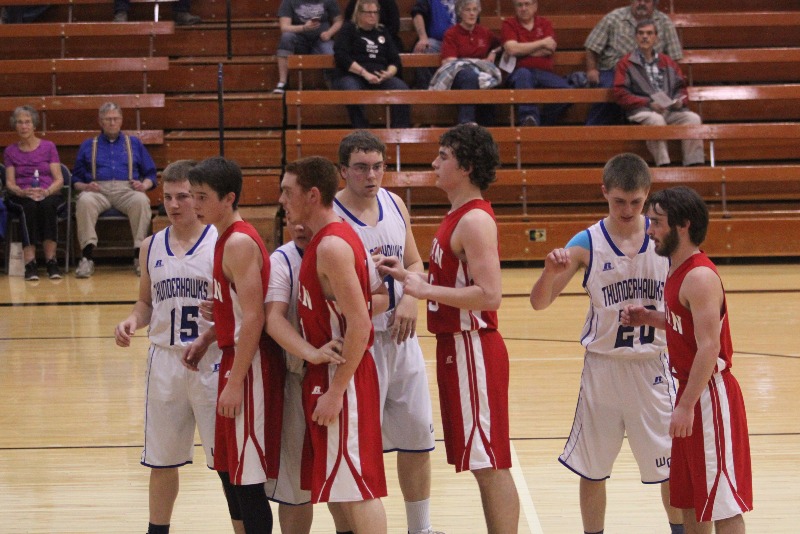 Trojans keep fans on the edge of their seats

On Friday, February 17 the Logan Trojans traveled to Grainfield for their final away game of the regular season, where they faced the Wheatland/Grinnell Thunderhawks.  The Trojans have been known to slow the game down which has resulted in some lower scoring games, but Friday’s game gave this a whole new meaning.  The Trojans prevailed by a final score of 28-26.  Logan was the only team to have a double-digit quarter, and that was only during the fourth quarter that they were able to accomplish this feat.   Not only was the pace slow during the game, but also the Trojans shot at 24% for the game.  With 67 seconds left in the game junior, Riley Allen, made 2 for 2 free throws to put the Trojan’s down by one, 25-26.  The Trojans fouled with 24 seconds left in the game and the front end of the 1-and-1 was missed.  Riley Allen grabbed the rebound and was fouled where he proceeded to make the first free throw and miss the second.  That rebound went to junior Colton Greving who went right back up for two!  The Trojans were then able to hold on for the 28-26 victory!  Logan was led by Josh Van Laeys with 10 points and 9 rebounds and Riley Allen with 7 points, 2 assists and 8 rebounds.  The Logan JV team had an exciting victory as they defeated the Thunderhawks by a score of 31-27 in a 3-quarter game.  Next week the Trojans host Lakeside and Cheylin for the final regular season games of the year.