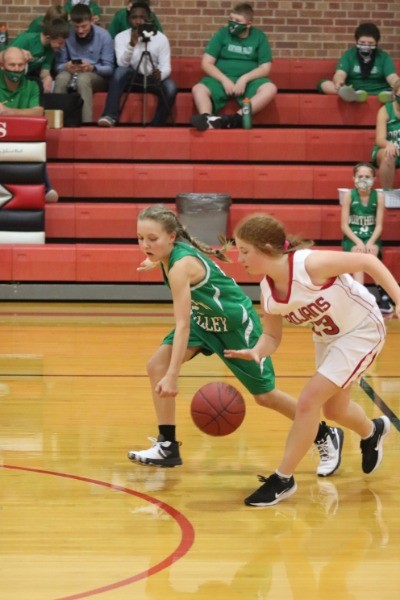 The Logan Junior High hosted the Huskies from Northern Valley on Thursday, Dec. 3 in the Logan Gym.  These were the first games played after the KSHSSA decision which prohibited fans from attending.  So, while this game traditionally packs the gym with fans from both sides cheering on their athletes, this game was just the opposite.

While the atmosphere wasn't what they were used to, the Trojans came out and played well for the fans at home who were watching by video.  The B-team girls got off to a slow start and fell to the Huskies with a score of 8-12.  From there on out, it was all Trojans as they dominated the rest of the night.

With a huge height advantage over the Valley, the B-team Trojans rolled over the Huskies 22-9.  The A-team girls game was a little closer, with the Lady Trojans scoring 28 to the Husky's 19.  In the final match-up of the night, the game was close in the first quarter, but the Trojans packed a punch in the 2nd quarter widening the gap and held on to the lead to the end with a final score of 44-28.

Next action for the Junior Trojans will be Thursday, Dec. 10 as they take on Paradise in the Damar gym.