This Afternoon
Partly sunny, with a high near 90. Southwest wind around 15 mph, with gusts as high as 20 mph.
Tonight
A 30 percent chance of showers and thunderstorms, mainly before midnight. Mostly cloudy, with a low around 63. West northwest wind 10 to 15 mph becoming west 5 to 10 mph after midnight. Winds could gust as high as 20 mph. New rainfall amounts of less than a tenth of an inch, except higher amounts possible in thunderstorms.
Thursday
Sunny, with a high near 93. West southwest wind around 5 mph becoming south southeast in the afternoon.
Weather forecast provided by weather.gov.
Sign In LinkSearch
Main Navigation 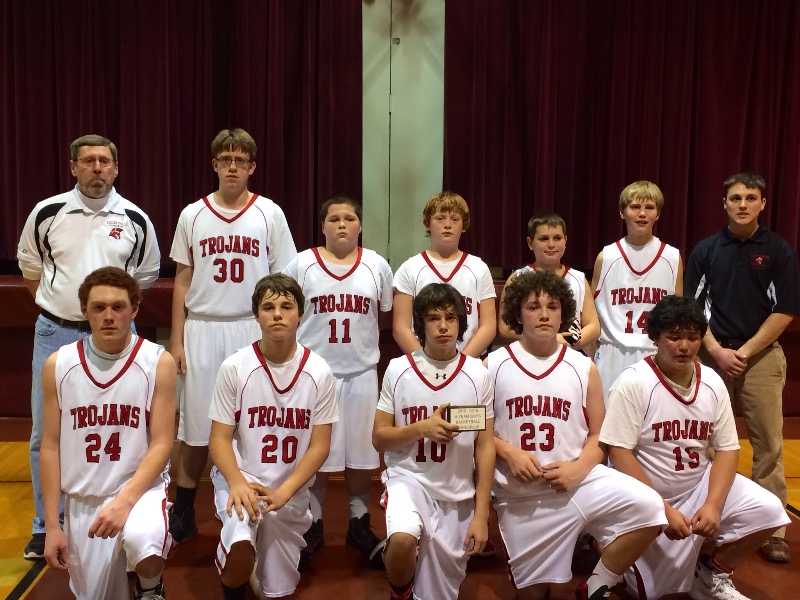 The JH High Lady Trojans had a dominating start to their 2016 WKLL JH basketball tournament. Their relentless press kept the Weskan Coyotes at bay as they were held scoreless for the first quarter and at half the Trojans held a commanding 29-4 lead. There were 4 Lady Trojans scoring in the game. Kelcee Braun had 23, Camryn Greving had 13, Harlee Voss followed with 8 and Khloee Braun finished with 2. Logan won the quarterfinal matchup 46-12.

In the second round of the tournament, the Lady Trojans faced Grinnell/Wheatland.  This was the second time the two had gone to battle and in the first game, Logan lost by a measly 3 points.  On Feb. 13 at the tournament, we had the same results as the Thunderhawks won the game 27-30.

In the the final game of the year, the JH Lady Trojans played Palco for the 3rd place title in the WKLL tournament.  The Trojans had a dominating lead in the first half and then the Palco Roosters mounted a serge in the 3rd quarter to get back in the game.  It was neck in neck to the finish, but Logan won the game by a score of 30-25.   Congratulations to Coach Greving, Coach Kats and the entire team for the gains they made this year and the successful finish.

At the WKLL Tournament, there is a both a B and A bracket.   The Logan/Palco boys B team received a bye in the first round and then played two games on Feb. 13.  In the first game, they faced Northern Valley and lost 27-50.  They then played Cheylin for the consolation championship.  The Logan/Palco team won 35-16 and earned the 3rd place title.

In the first round of the WKLL A team Tournament, the Logan/Palco Trojans were paired up with the Cheylin Cougars. The first half provided back and forth action and a 23-20 Logan/Palco lead.  Cody Brown had a big offensive day as he had 20 points.  Ian Sparks had 8 and Dylan Van Laeys picked up 6.  The Trojans held on for 45-39 victory and a semi-final pairing with Northern Valley.

In the semi-finals the Huskies were ready to play and came out ahead in the first quarter 6-9 and 17-18 at half.  The third quarter provided an 8-0 run for the Trojans and the chance to finally take the lead.  Logan/Palco was able to hold on to the lead and a 34-29 victory.  Trojans leading the way in scoring were, Sparks with 13 and Brown with 8.

After the Northern Valley win, the JH Trojans faced Grinnell/Wheatland in the championship game.  Logan had previously beat the Thunderhawks and they were evidently waiting for revenge.  The Trojans didn’t have an answer for the inside/outside game of the Thunderhawks and the Trojans lost 30-43.  The Logan Junior High boys A team finished as the WKLL Tournament runner-up and with this being their only loss of the year.  It was a great season.  Congratulations to Coach Jenner, Coach Newell and all the boys.