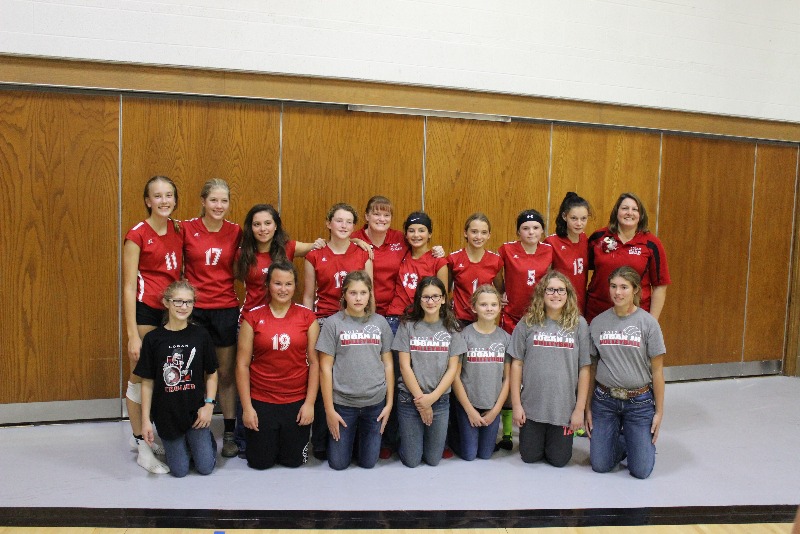 The Junior Lady Trojans ended their volleyball season with an overall record of 8 wins and 5 loses and earned 4th place in the WKLL League Tournament on October 19, 2017.  Throughout the season, the Lady Trojans were victorious over Heartland Christian, Cheylin, Golden Plains, Hill City, Palco and Tri-Plains Brewster.  They lost regular season games to Northern Valley and Grinnell-Wheatland.  Overall, the regular season was a success, and the Trojan volleyball players showed improvement each time they took the court both in practice and in games.  The B-team finished with an overall record of 2-5.

The final round of pool play vs. Golden Plains proved to be a tough match as the Trojans lost in two sets; 23-25; 19-25.  With a record of 2-1 in pool play, the Trojans earned a spot in tournament which allowed them two more matches for the day.

The Trojans met a very good Thunderhawk team, Grinnell-Wheatland, and were unable to compete with their tough serving and aggressive play.  The Trojans lost 6-25 and 20-25.

The Lady Trojans had one more shot for a win vs. Northern Valley in the final match of the day.  However, the Lady Trojans could not hang on and were defeated by the Huskies in two sets; 21-25; 15-25.  The Trojans were 4th place finishers in the 2017 WKLL League Tournament.

Overall, Coach Cher Greving was pleased with the improvement made throughout the season.  "The girls were always eager to get into the gym to learn something new.  They were never complacent with their play, but always strived to improve themselves in all facets of the game.  A 4th place finish in tournament is nothing to hang our heads about; however, the girls expect more and were disappointed with the losses on the day.  I would like to thank the fans for their support throughout the season and thank you to Coach Jones, Coach Waters and Mr. Kirkendall for their help and support on league tournament day which was a long one!  Said Coach Greving.