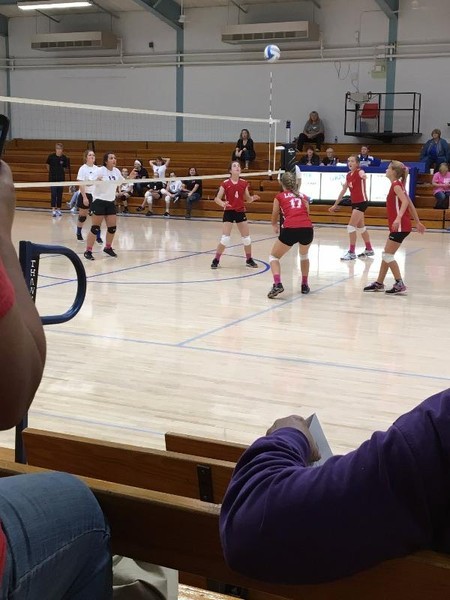 WKLL JH Tournament Recap
Thursday, October 20 in Grinnell
Logan started the day as the #8 seed and had to win a "play-in" game vs. TriPlains/Brewster(#9 seed) to earn a spot in pool play.  Logan defeated TriPlains/Brewster in 2 sets 25-12 and 21-15 while serving 90% and scoring 14 aces!
This win advanced Logan to pool play with Grinnell/Wheatland (#5 seed), Western Plains/Healy (#1 seed) and Weskan (#4 seed).
In the first set of pool play, Logan gave Grinnell/Wheatland a competitive match, but came up short losing 25-27 and 18-25.  Logan served 80% in their losing effort.
In the second set of pool play, Logan came out strong and beat the #1 seed, Western Plains/Healy, with scores of 25-17 and 25-14.  In this match, Logan served 85% and had 14 aces!
In the final set of pool play vs. Weskan, Logan needed to win to advance to the tournament.  Logan pushed on and continued to play with a purpose to defeat Weskan in 3 sets!  Logan lost the first set 21-25, but bounced back to win the next two; 25-22 and 25-19!  Logan's success is contributed to 94% serving and 11 aces!  Logan advances to tournament.
Logan matched up with Golden Plains in the first game of tournament play and lost in two sets; 18-25 and 14-25.  The girls missed only 2 serves in these two sets, but were never able to make a run on the Bulldogs.
Logan faced off with Grinnell/Wheatland in the consolation match and came up short losing 11-25 and 21-25.  Fatigue became a factor and Logan's serving percentage dropped to 84% in the match.  Logan finishes in 4th place!
"It was a great day of volleyball!  The girls battled until the very end.  Even in the last set vs. Grinnell, we made a run and put ourselves in a position to win.  Fatigue definitely became a factor in our play.  After arriving in Grinnell at 8:00 AM, we made it our goal to be the first to arrive and the last to leave.  We met our goal by coming out of pool play and making it to the tournament.  I'm very proud of the girls.  They played with pride!  They improved in practice everyday, and their success is an account of their hard work.  Also worth mentioning is our "cheering section."  The junior high boys and sponsor, Nancy Jenner, traveled along to support the Lady Trojans.  Their energy and enthusiasm during the day also motivated us to play well.  At the end of the day, they were awarded the "Spirit Award" in which they were very proud of!  Great job Trojans!" said head coach Cher Greving.
Photos by David Alexander.
Share via email