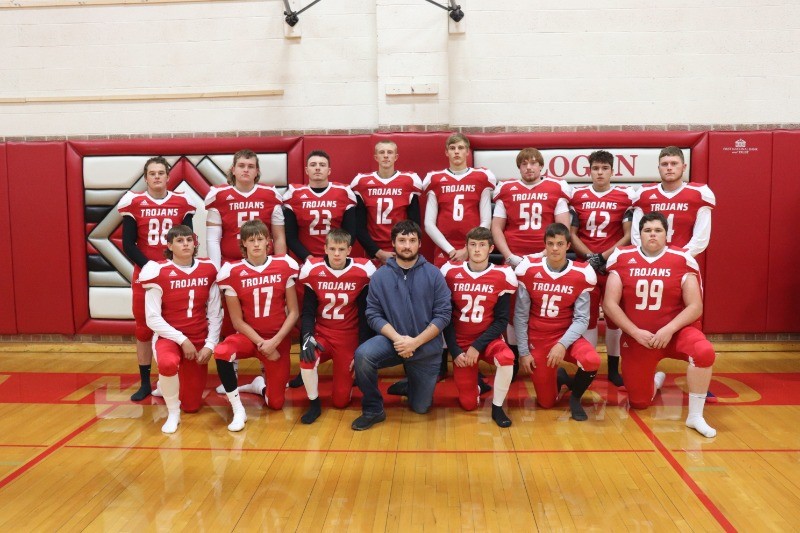 The 2020-21 Trojan football team had its ups and downs.  They started off the season with a 4-0 record, winning games against Lakeside 32-28, Stockton 30-7 Lincoln 64-14, and put up a lot of points against Wallace County, 92-52.  The Trojans then lost their Senior running back Micah Thompson due to injury and the wheels started falling off the bus.  The Trojans played a “state power house” St. Francis, and lost 46-0.  The Trojans played the Wheatland Thunder-Hawks, and the Trojans had a very tough time guarding the pass, and lost 52-16. In their next game they had a very tough, hard fought game against Triplains/Brewster and lost 50-48.  In the last game the Trojans lost 68-26.

In the Trojans first win over the Lakeside Knights, Dylan Van Laeys threw for 107 yards and 1 touchdown.  The next game against the Stockton Tigers the Trojans played a very solid game offensively and defensively.  Then they played the Lincoln Leopards and the Trojan backs put up 7 touchdowns and 291 yards.  In the Trojans win against Wallace County the Trojans ran all over the Wildcats.  The backs combined for 565 yards with 338 of them coming from Senior running back Micah Thompson.  He also scored 7 of the 10 touchdowns.  The Trojans schedule started to get a little tougher starting with the St. Francis Indians.  The Trojans couldn’t do anything on offense and couldn’t get a stop on defense.  The Wheatland-Grinnell Thunderhawks were next on the list, the Thunderhawks threw the ball all over the Trojans.  Against the Triplains Brewster Titans the Trojans lost but left it all out on the field. In the game against the Quinter Bulldogs, it was a very cold game but the Bulldogs came out victorious knocking the Trojans out of playoff contention.  The Trojans last game was against the Dighton Hornets.  The Trojans ran a little trickery on offense and amazing defense helping the Trojans with 50-0.

On the offensive side of the ball Junior Josh Uhland leads the Trojans in rushing yards with 702 yards.  Senior Micah Thompson leads the team in all purpose yards with 853. Junior Dylan Van Laeys also leads the team in total touchdowns with 16.  Van Laeys also leads the Trojans in total yards with 1191. He has 560 rushing yards, and 631 through the air, he also has 6 passing touchdowns.  Van Laeys was asked how the season has gone so far. “I would say we have definitely had some ups and downs, but we have been able to push through it and still have an opportunity to make districts.  No matter what happens it has been a fun year and I know we are all grateful we are even getting to play,” said Dylan Van Laeys.

On the defensive side of the ball.  Dylan Van Laeys leads the team in sacks with 5 total.  Senior Kaden Shellito leads the team in interceptions with 4.  His favorite receiving target has been Junior Jadin Newell 12 completed passes for 275 yards.  Jadin Newell said “I like all my teammates.  They are all funny and really cool. Our season started off really good. Football taught me how to overcome pain and taught me how to play through pain.  It also taught me many life lessons.”

“I think our season hasn't been great but not bad at the same time.  We lost some games we probably should've won but we have get ready for these really important games up ahead,” said Ian Sparks.  Senior Linebacker that leads the team with 86 tackles.  Sparks also has a blocked punt.