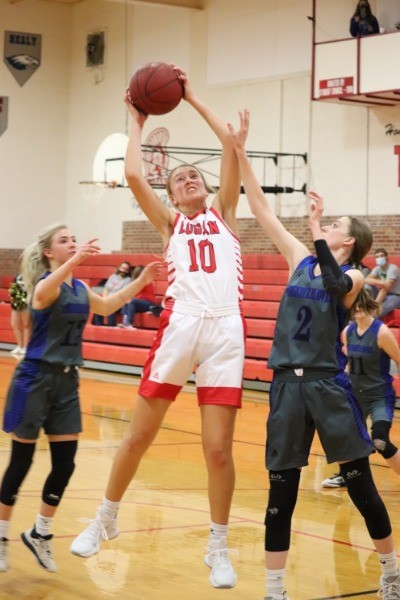 In their season opener, the Logan Trojans hosted Wheatland/Grinnell on Friday, Dec. 4.  With no JV girls game, the JV boys started off the night with two quarters of playing time.  The Trojans struggled a bit allowing the Thunderhawks to get a jumpstart on them and the 7-1 lead early in the game.  Down by 10 at one point in the game, the Trojans cut the lead by 1 and finished with the 11-20 loss.

With the gym already quiet without fans, the Lady Trojans didn't have much to cheer about as they struggled to put points on the board, ending the 3rd quarter down 9-18.  They came alive in the 4th quarter though as Kenize Wells and Khloee Braun each drained 3-pointers, and Kirsten Marcotte added two, making the score 18-18 with 3:59 left on the clock.  Another bucket by each team left the score 20-20 at the end of regulation.  In overtime, the Trojans kept fighting, and with points from Wells, Abby Graham, Riley Delimont and Braun, they outscored the visitors 29-26.  Senior Khloee Braun led the charge with 14 points and 14 rebounds, followed by Kenzie Wells with 8 points and Kirsten Marcotte with 7.  Abby Graham pulled down 10 rebounds.

In the varsity boys match-up, the Trojans jumped to an early 14-10 lead in the first quarter.  While they held that lead for the rest of the game, it was far from comfortable.  Up by 5 at halftime, the Thunderhawks came close in the 3rd quarter, only down by 3.  The Trojans extended their lead and with 1:53 on the clock, the score was 45-36.  Wheatland wasn't done yet though as they added 11 points before the game ended.  Senior Jadin Newell kept the Trojans on top with 4 points from the free throw line, and the Trojans hung on for the 51-47 win.  Junior Trey Kats scored 14 for the night followed by senior Ian Sparks with 12.  Sparks and Dylan Van Laeys both ended the night with 11 rebounds.

Next action for the Trojans will be Tuesday, Dec. 8 as they play in the Sagebrush Shootout in Brewster.