On January 9, the LHS Varsity Scholars Bowl team comprised of Zachary Jansonius, Jed Peace, Ian Sparks, Khloee Braun, and Dylan Van Laeys competed at Osborne.  Nineteen teams were entered in the competition.  Logan’s team finished 4-5 on their side of the bracket.  Three of their losses were very close matches.  They lost two tie breaks and another match by just one question.  They competed well!  Ian was the leading scorer with 150 points.  Their next competition will be the WKLL Meet in Ransom on January 22. 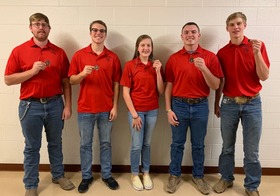 On November 11 the LHS Varsity Scholars Bowl team traveled to Cheylin High School to compete in their first tournament of the year.  Competing for the Trojans were Zachary Jansonius, Jed Peace, Ian Sparks, Khloee Braun, and Dylan Van Laeys.  There were eight teams competing.  The team finished 4-3.  Their three losses were extremely close as they lost a tie-break to Triplains and only lost to Golden Plains by 10 points.  They were the only team to defeat Wheatland/Grinnell, the eventual champions.  The Trojans were proud to finish in 3rd place and worked really well together as a team.  Leading scorers were Ian with 100 points and Zachary with 80 points.  Way to go Trojans!

The JV Scholars Bowl team consisting of Madison Brackney, Dylan McClurg, Kylee Uhland, and Brandon Zaffuto competed in a ten team round robin tournament at Palco on Monday.  They defeated Stockton and Wheatland/Grinnell.  . . .

On Thursday, Feb. 2, the Logan High School Scholars’ Bowl traveled to Natoma to participate in the KSHSAA 1A Div II Regional Scholars’ Bowl.  The Trojans had a round robin style with 11 teams in attendance.  Logan . . .

On Wednesday, January 18, the Logan High School Scholar’s Bowl traveled to Grainfield for the WKLL League meet.  With 12 teams in attendance, a round-robin format was used.  Logan opened up against Western Plains winning a . . .

On Thursday, January 12 th , the Logan High School Scholar’s Bowl traveled to Osborne.  With 18 teams in attendance, the teams were divided into two 9-team pools.  Logan opened up against Smith Center beating them . . .

Logan traveled to Wilson for the State Scholar's Bowl on Saturday, February 13th.  They faced Cunningham, Hutchinson-Central Christian, Rolla, Sharon Springs-Wallace County, & Axtell.  After going 2-3 in pool play, there was . . .

Scholars' Bowl is on to State!

On Thursday, February 4, the Logan Scholars’ Bowl attended the 1A Div 2 Regional meet at Natoma, starting at 3:00.  This was scheduled to be a 10 team round-robin tournament with the top 3 teams going to State.  In the first . . .